“From the day after the Sabbath, the day you brought the sheaf of the wave offering, count off seven full weeks (Shavuot).”  (Leviticus 23:15 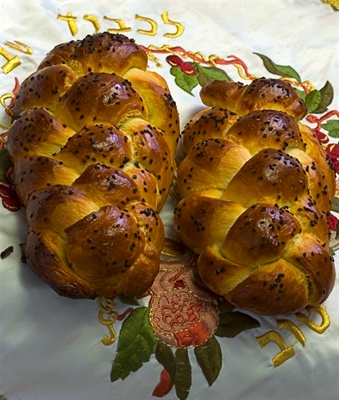 “Bring two loaves made of two-tenths of an ephah of the
finest flour, baked with yeast, as a wave offering of
firstfruits to the Lord.”  (Leviticus 23:17)
Although Shavuot is considered by many as the “birth of the Church,” the people who experienced the Ruach HaKodesh at this time were God-fearing Jews from many nations:
“Now there were staying in Jerusalem God-fearing Jews from every nation under heaven.”  (Acts 2:5)
On that Shavuot, Israel saw an amazing reversal.  After receiving the Torah at Mount Sinai, 3,000 souls perished because of the sin of the golden calf (Exodus 32:28).
On this same day all those years later, this same number of souls were saved after the Ruach HaKodesh was poured out!  About 3,000 people were added to the community of Believers on Shavuot.  (Acts 2:41)
The Spirit of God reversed the destruction caused by the sin of man!
And Yeshua’s followers worked tirelessly to bring the Good News to all of Israel and then beyond to the Gentiles.
Exercising Love and Generosity
One of the very first things these Believers did after receiving the Spirit of God was form a Messianic kibbutz (communal lifestyle) where they shared all things in common.  (Acts 2:44, 4:32)
They no longer lived to fulfill their own selfish desires; they shared all they had with anyone in need.
May each of us experience the Ruach HaKodesh in a fresh, new and powerful way this year on Shavuot, transforming our hearts, and making us more generous givers.
God gave us two of His most priceless gifts on this day: the Torah (His Holy Word) and the Ruach HaKodesh.
We need both Truth and Ruach.  The Torah is the Word of Truth (Davar Emet), but it is the Spirit that gives us the grace to live out that Truth in our daily lives.  One of those Truths is the concept of celebrating God’s goodness through giving.
It is traditional in Israel for children to make and wear zer prachim
(floral head-wreath) on Shavuot.  As an agricultural holiday, the
use of plants and flowers for decorating at Shavuot is fairly common.
As well, Jewish legend has it that Mount Sinai burst into flower at the
giving of the Torah.
Celebrating the Goodness of God
“Three times a year all your men must appear before the Lord your God at the place He will choose: at the Festival of Unleavened Bread (Passover), the Festival of Weeks (Shavuot) and the Festival of Tabernacles (Sukkot).  No one should appear before the Lord empty-handed:  Each of you must bring a gift in proportion to the way the Lord your God has blessed you.”  (Deuteronomy 16:16–17)
Shavuot is one of the three pilgrimage festivals in which the Jewish People would come to Jerusalem to bring their offerings to the Temple.  The people were to come before the Lord with offerings directly proportional to how the Lord had blessed them.
Of course, the Word of God exhorts us to give throughout the year to the Levites (those who serve God in the Holy Sanctuary as ministers and teachers of the Word), as well as the foreigners, the fatherless, and the widows.
We see in Scripture that the blessings God has blessed us with are not just for our own gain.  We are to share with others who are in need.  It was for this reason that God also commanded the people not to harvest the entire field but to leave the corners of their fields for the poor.
“When you reap the harvest of your land, do not reap to the very edges of your field or gather the gleanings of your harvest.  Leave them for the poor and for the foreigner residing among you.  I am the LORD your God.”  (Leviticus 23:22)
Therefore, the traditional Scripture reading for Shavuot is the Book of Ruth who gleaned in the fields of Boaz.  Jewish tradition calls for all to study the Book of Ruth together on the eve of Shavuot.
God never asks us to do anything that He has not already done.
We can’t out-give God.  He is the most generous giver.  One of the best-known Scripture from the Gospels, John 3:16, says that “God so loved the world that He gave His only begotten son, so that whoever would believe in Him would not perish but have eternal life.”
Please pray that at this harvest festival, the Lord of the Harvest (Adon HaKatzir) will send forth more laborers into the harvest fields of Israel and that the harvest of souls into His Kingdom will be plentiful!
“Then He said to His disciples, ‘The harvest is plentiful but the workers are few.  Ask the Lord of the harvest, therefore, to send out workers into His harvest field.’”  (Matthew 9:37–38)